One of the least publicized of all Army services is the Royal Australian Army Nursing Corps, which has given 100 years of dedicated work to caring for Australian servicemen in times of war and its aftermath.

The history of the Corps dates back to 1898 when a small nursing service was formed in Sydney. It consisted of one Lady Superintendent and twenty four nurses. The first actual service of nurses was during the Boer War (1898-1903).

When war broke out in 1914, the Australian Government raised the first Australian Imperial Force for overseas service. The nurses to staff the medical units, which formed an integral part of the AIF, were recruited from the Australian Army Nursing Service Reserve and from the civil nursing profession.

Senior Officers were more inclined to have trained male soldiers in preference to female nurses. Major General Howse (Director of Medical Services) has been quoted as saying that “the female nurse (as a substitute for the fully trained male nursing orderly) did little toward the actual saving of life in war... although she might promote a more rapid and complete recovery”. General Howse was speaking at a time when the contribution of the Nursing Service to the treatment of the wounded soldiers, at an early stage, had yet to be recognized by the Australian authorities.

The first draft of Sisters in the Australian Army Nursing Services (AANS) left Australia in September 1914; and throughout the war, the Nursing Service served wherever Australian troops were sent, and numerous other countries besides these. Most also served in British hospitals in various theatres of war.

They served in places such as Burma, India, The Persian Gulf, Egypt, Greece, Italy, France and England.

The record of service for these Sisters is a brilliant one, and one which set a very high standard for all who were to follow. The following statistics are noteworthy:

An example of one nurse's experience under fire is from Sister Kelly’s diary from a Casualty Clearing Station on the Western Front....

“The noise was so terrific, and the concussion so great that I was thrown to the ground and had no idea where the damage was. I flew through the chest and abdo wards and called out: ‘are you alright boys?’ ‘don’t bother about us’ was the general cry.”

All the hospitals lights were out and there was a faint moon, but the sky overhead was full of searchlights and fragments from the bursting anti-aircraft artillery. She passed the cook running for an adjacent paddock, swearing hard and complaining that the bombs had put his fire out.

Running on, she suddenly fell headlong into a bomb crater...

“I shall never forget the awful climb on hands and feet out of that hole that was about five feet deep with greasy clay and blood (although I did not know then that it was blood). A bomb had fallen directly alongside the pneumonia ward (pre-antibiotic).”

The tent had collapsed on forty six stretcher cases inside...

“though I shouted, nobody answered me, or I could hear nothing for the roar of planes and artillery. I seemed to be the only living thing about.”

She raced back to the tent and was shortly joined by the badly shaken Padre, who went off to get help (after urging her to take cover). She ignored the advice and again tried to get into the tent. Grabbing hold of a handle under the fly she tried to drag a stretcher free. The patient was dead, and the splintered handle came away in her hand, throwing her backwards into the crater again.

“I cannot remember what came next, or what I did, except that I kept calling for the orderly to help me and thought he was funking, but the poor boy had been blown to bits. Somebody got the tent up, and when I got to the delirious pneumonia patient, he was crouched on the ground at the back of the stretcher. He took no notice of me when I asked him to return to bed, so I leaned across the stretcher and put one arm around and tried to lift him in. I had my right arm under a leg, which I thought was his, but when I lifted I found to my horror that it was a loose leg with a boot and a puttee on it. It was one of the orderly’s legs which had been blown off and had landed on the patient’s bed. The next day they found the trunk about 20 yards away.”

To put into some perspective the workloads and consequent stresses these nurses endured, consider:

During the First World War, a one thousand bed hospital, in Cairo, completely under tentage, without any floor covering was staffed by 1 Matron, 15 Sisters and 30 Staff Nurses with male medical orderlies from the Australian Army Medical Corps. 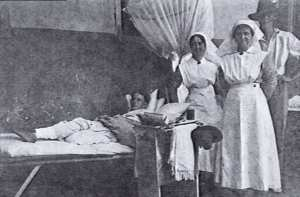 Compare this to the Royal Melbourne Hospital in 1990... 700 beds and a staff of 670 nurses, excluding administration and education.

Acting under such adverse conditions, these ladies proved themselves to be of awesome dedication, courage and spirit, and truly professional.