The outbreak of war in August 1914 seemed to unleash a huge wave of enthusiastic support for Britain, and support for Australia’s part in the war.

All major political parties, churches, community leaders and newspapers seemed to support Australia’s entry. It was seen as a moral and necessary commitment. 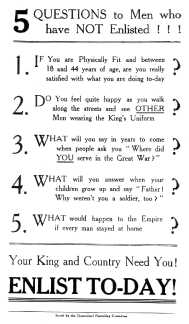 An enlistment poster issued by the Queensland Recruiting Committee.

There was a rush to the recruiting offices, and only the very fittest and healthiest men were accepted at this stage.

The whole country seemed to be both enthusiastic for the war, and united in support of it.

There is, however, some evidence that this is an incomplete and even distorted impression. There are hints and suggestions of the fracture lines in society that would later lead to great bitterness and divisions in Australian society.

For example, while many tried to enlist, far more did not. Even during the first enlistment rush, there are stories of white feathers being sent, and women rejecting and abusing men who did not enlist.

There were also some who actively opposed Australia’s entry into the war, though their voice seems to have had few ways of being heard at the time.