The following was written by Pericles well over two thousand years ago, long before the first ANZAC Day, but only a stone’s throw from Gallipoli:

Each has won a glorious grave - not that sepulchre of earth wherein they lie, but the living tomb of everlasting remembrance wherein their glory is enshrined. For the whole earth is the sepulchre of heroes. Monuments may rise and tablets be set up to them in their own land, but on far-off shores there is an abiding memorial that no pen or chisel has traced; it is graven not on stone or brass, but on the living hearts of humanity. Take these men for your example. Like them, remember that prosperity can be only for the free, that freedom is the sure possession of those alone who have the courage to defend it.

Engraved forever at ANZAC Cove (see image below) are these words from Kemal Ataturk, the Commander of the Turkish 19th Division during the Gallipoli Campaign and the first President of the Turkish Republic from 1924-1938:

Those heroes that shed their blood and lost their lives. You are now living in the soil of a friendly country therefore rest in peace. There is no difference between the Johnnies and the Mehmets to us where they lie side by side here in this country of ours. You, the mothers, who sent their sons from faraway countries wipe away your tears; your sons are now lying in our bosom and are in peace. After having lost their lives on this land they have become our sons as well. 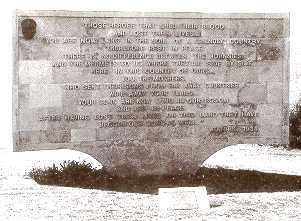 (Above) The Ataturk Memorial at Ari Burnu on the Gallipoli Peninsula.
(Image from Tom Curran’s book Across the Bar)

At the going down of the sun...

I crouched in a shallow trench on that hell of exposed beaches... steeply rising foothills bare of cover... a landscape pockmarked with war’s inevitable litter... piles of stores... equipment... ammunition... and the weird contortions of death sculptured in Australian flesh... I saw the going down of the sun on that first ANZAC Day... the chaotic maelstrom of Australia’s blooding.

I fought in the frozen mud of the Somme... in a blazing destroyer exploding on the North Sea... I fought on the perimeter at Tobruk... crashed in the flaming wreckage of a fighter in New Guinea... lived with the damned in the place cursed with the name Changi.

I was your mate... the kid across the street... the med. student at graduation... the mechanic in the corner garage... the baker who brought you bread... the gardener who cut your lawn... the clerk who sent your phone bill.

I was an Army private... a Naval commander... an Air Force bombardier. no man knows me... no name marks my tomb, for I am every Australian serviceman... I am the Unknown Soldier.

I died for a cause I held just in the service of my land... that you and yours may say in freedom... I am proud to be an Australian.

This 60 cm x 90 cm framed message, a poignant tribute to the Australian serviceman, hangs in the former offices of the Queensland State Headquarters of the RSL located in a room under the Shrine of Remembrance.

They shall grow not old, as we that are left grow old;
Age shall not weary them, nor the years condemn.
At the going down of the sun and in the morning
We will remember them.

The Ode comes from For the Fallen, a poem by the English poet and writer Laurence Binyon and was published in London in The Winnowing Fan: Poems of the Great War in 1914. This verse, which became the Ode for the Returned and Services League, has been used in association with commemoration services in Australia since 1921.

Every year, after ANZAC Day and Remembrance Day, the Department of Veterans’ Affairs receives many letters asking about The Ode.

The issue raised by most letters is whether the last word of the second line should be ‘condemn’ or ‘contemn’. Contemn means to ‘despise or treat with disregard’, so both words fit the context.

They shall grow not old, as we that are left grow old: Age shall not weary them, nor the years condemn. At the going down of the sun and in the morning We will remember them.

DVA’s Commemorations Branch has been researching the poem and its background. The lines comprise the fourth stanza of the poem For the Fallen by Laurence Binyon, and were written in the bleak early days of World War 1. By mid-September 1914, less than seven weeks after the outbreak of war, the British Expeditionary Force in France had already suffered severe casualties. During this time, long lists of the dead and wounded appeared in British newspapers. It was against this background that Binyon, then the Assistant Keeper of Prints and Drawings at the British Museum, wrote For the Fallen. This poem was first published in The Times on 21 September 1914.

The Times shows ‘condemn’. Some people have suggested that the use of ‘condemn’ in The Times was a typographical error. If it were, one would have expected then that the word would be correctly shown in The Winnowing Fan, published only a few months later and for which Binyon would have had galley proofs on which to mark amendments. Binyon was a highly educated man and very precise in his language and use of words. There is no doubt that had he intended ‘contemn’, then it would have been used.

There have been variations in punctuation within the poem across the years and a change in the spelling from ‘stanch’ to ‘staunch’. Dr John Hatcher, who published in 1995 an exhaustive biography of Binyon, does not even refer to any possible doubt over condemn/contemn, despite devoting a solid chapter to For the Fallen.

The British Society of Authors, who are executors of the Binyon estate, says the word is definitely ‘condemn’, while the British Museum, where Binyon worked, says its memorial stone also shows ‘condemn’. Both expressed surprise when told there had been some debate about the matter in Australia. Interestingly, the text used in 1916 by Sir Edward Elgar to set the poem to music has eight stanzas; the eighth being inserted between what now is regarded as the third and fourth stanzas.

The condemn/contemn issue seems to be a distinctly Australian phenomenon. Inquiries with the British, Canadian, and American Legions reveal that none has heard of the debate. Despite an exhaustive search by Commemorations Branch through Binyon’s published anthologies, no copy of the poem using ‘contemn’ was found. The two-volume set Collected Poems, regarded as the definitive version of Binyon’s poems, uses ‘condemn’. Although inquiries are continuing, there now seems little prospect of finding anything to support even a little the ‘contemn’ claim.

In Australia, the Returned and Services League, in its League handbook, shows ‘condemn’, while a representative of the Australian War Memorial said it always uses ‘condemn’ in its ceremonies. So how did the confusion start? No-one knows, but certainly the question has been debated for many years. Surely now it’s time to put the matter to rest.