See the new book Seek!, An illustrated and pictorial tribute to Australia’s tracker dogs in the Vietnam War

There is a shell-shocked Digger who will be in Vietnam until he dies … He is Private Tiber, a black labrador tracker dog. Tiber is a casualty of a Viet Cong attack in May last year. A rocket-propelled grenade burst only a few feet away from him. Since then he has been gun-shy -- sometimes he jumps whimpering into a ditch when Australian artillery or mortars fire.

Eleven of the most popular contributors to the Australian war effort in Vietnam could not return home when their tour of duty ended. They were the black labrador tracker dogs used by the Australian Task Force. 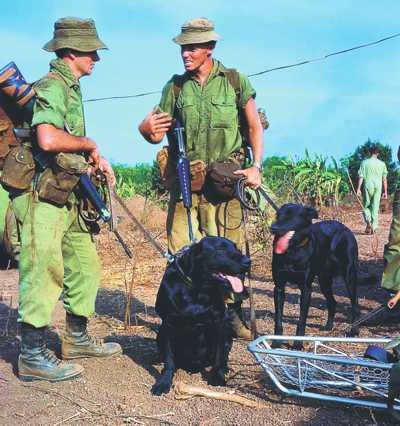 Photo taken by John Dalton. Published in My Vietnam: Photographs by Australian Veterans of the Vietnam conflict. 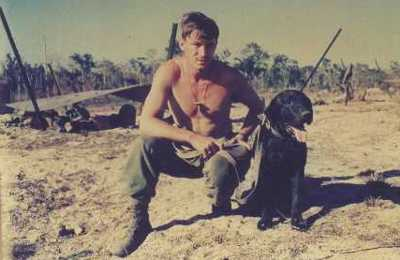 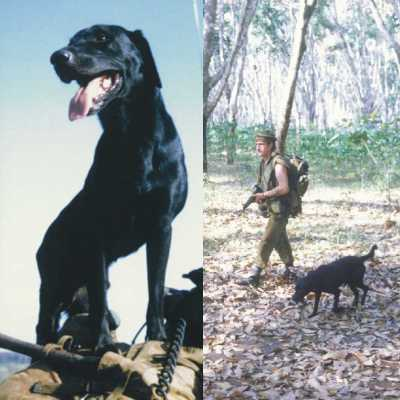 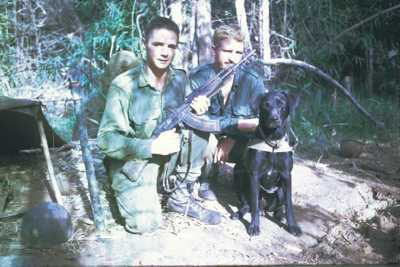 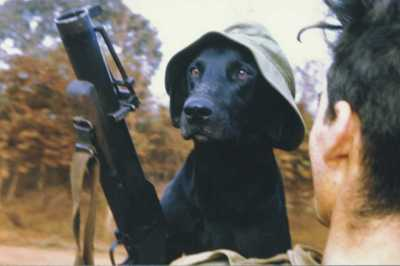 Photographs immediately above courtesy of the Australian Army Trackers and War Dogs Association.

The dogs were the core of Combat Tracker Teams that were used from 1967 until the last combat troops left in late 1971. Trained from the age of about 10 months at the Tracking Wing of the Ingleburn Infantry Centre, NSW, two dogs were assigned to each of the Australian battalions based at the Task Force base at Nui Dat, in Phuoc Tuy Province. Full-time use of the dogs in Vietnam from late 1967 followed their successful use in Malaya in the 1950s, and a trial in Vietnam during most of 1967. Housed in kennels at Nui Dat, the dogs’ lives followed an established routine. They were groomed and checked every day, and taken outside the base perimeter for training runs on tracks set through the bush. South Vietnamese soldiers were usually used to set scent trails, so the dogs could get used to following their distinctive smell. 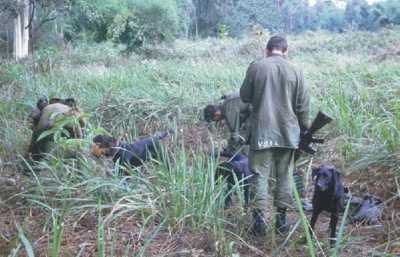 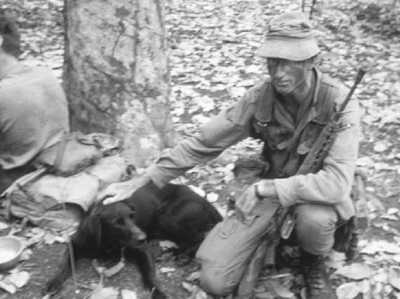 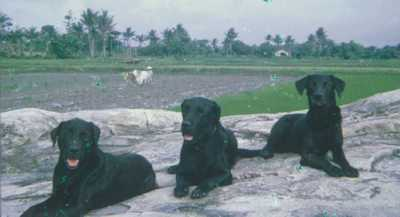 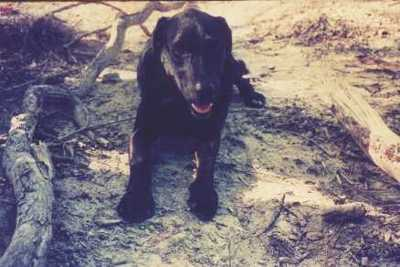 Photographs immediately above courtesy of the Australian Army Trackers and War Dogs Association.

Each Tracker Team, consisting of the two dogs and their handlers, two visual trackers, and two covermen (a machine-gunner and a signaller), operated on standby out of Nui Dat. Usually called out to follow up enemy trails or to locate suspected enemy hideouts after a contact, the teams would be airlifted by helicopter into the area of operation. The dogs loved these helicopter flights, finding the cool air a relief from the oppressive tropical heat. Once on the ground, the dog would be put on to the scent of retreating enemy. The dog would follow the scent, usually at speed, until a location was found, when he would stop with nose or paw extended in a ‘point’, facing the suspected hideout. The tracker and dog would then fall back while the rest of the section searched the area, often finding wounded enemy or recently occupied bunker systems that would otherwise have been missed.

The dogs were outstandingly successful at their combat tasks in Vietnam. Apart from their success in locating enemy and their support systems, the dogs saved the lives of their handlers and team members on many occasions. Although not trained to detect mines (despite recommendations by some soldiers that mine dogs be used in Vietnam), the dogs were intelligent and sufficiently well-trained to do so. HandlerPeter Haran summed up his dog’s worth: Caesar … could see, smell and hear Charlie slang term for Viet Cong, from the military phonetic alphabet for the letters ‘V’ -- Victor and ‘C’ -- Charlie long before we walked into a firefight. He knew where the mines were, where the trip wires were strung, and he could cover ground chasing the enemy at speeds which literally took your breath away. 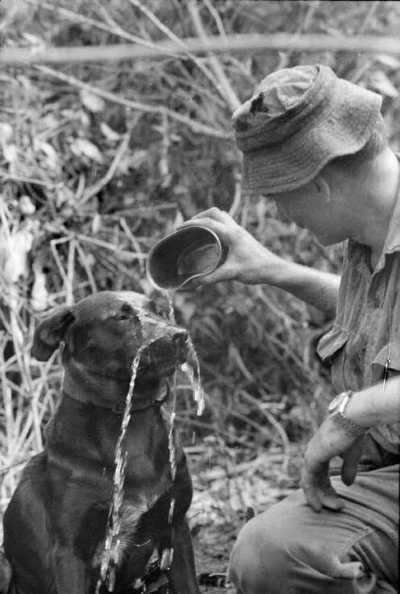 SKE/67/1139/VN. Vietnam, November 1967. Justin, one of two tracker dogs with 7th Battalion, the Royal Australian Regiment (7RAR) has a cup of water poured over his muzzle by his handler, Private Tom Blackhurst of Swansea, NSW. Justin had just successfully located a group of Viet Cong during operation Santa Fe in the north-east of the province. A little while after the Viet Cong had withdrawn, the 7th Battalion tracker team was called in, eventually locating members of the enemy about thirty yards ahead. The tracker team immediately opened fire and inflicted two fatal casualties.

The fate of Australia’s war dogs, once their service came to an end in Vietnam, caused consternation in Army circles and anguish to their handlers. Unlike their human counterparts, the length of duty for a tracker dog was around three years (at least one year too long, according to many handlers). This made it impossible for the dog to return to Australia when his handler’s tour ended. The main reason for keeping the dogs ‘in country’ was the Army’s reluctance to cover the quarantine costs involved.

After much discussion about the issue, and with the matter having been raised in Parliament, the Army decided in 1968 that at the end of their working lives the dogs would be kept by the battalion as a reserve, then given as pets to European or Australian families resident in Saigon. Only as a last resort, if no home could be found, would they be destroyed. In the event, none of the 11 dogs who served in Vietnam was put down, with homes being found for the ten who survived. (One dog, Cassius, died of heat exhaustion after a training run.)

Having to part with their dogs at the end of their tours was often the hardest thing the dog handlers had to face in Vietnam. Some likened it to losing a child. Denis Ferguson trained Marcus in Australia and served with his ‘mate’ during two tours of Vietnam. Ferguson applied through all the appropriate Army channels to take Marcus home with him, even offering to pay all the quarantine costs. The curt refusal he received -- no reasons were given -- caused Ferguson trauma that he still feels deeply.

The family of Garry Polglase, the handler of Julian, had a similar experience. PoIglase was accidentally killed in Vietnam in April 1968, and his mother applied to have the dog brought home soon after her son’s death. After questions were raised in Parliament, and the family had conducted a public campaign that raised enough money to pay the quarantine costs of all the tracker dogs, the Army confirmed its policy on the fate of the dogs and refused the request. 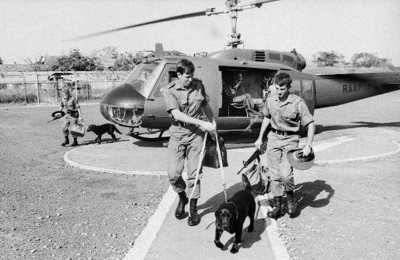 FOD/71/0563/VN. Saigon, South Vietnam, 17 November 1971. Arriving by helicopter to meet their new owners are tracker dogs Marcian and Milo. Marcian was handed over to his new owner, Mr R. Brash, the Counsellor and Consul General with the British Embassy in Saigon. Milo, who had been in Vietnam since 1968, was handed over to Mr J. R. Cochrane, the assistant manager of the Chartered Bank in Saigon. Both dogs were with the 4RAR /NZ (ANZAC) (The ANZAC Battalion comprising 4th Battalion, The Royal Australian Regiment and a component from the 1st Battalion, Royal New Zealand Infantry Regiment). 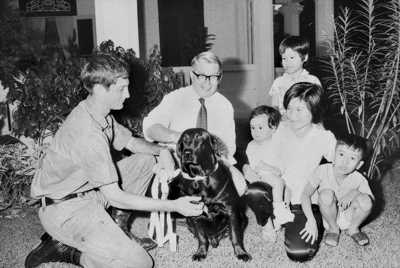 FOD/71/0566/VN. Saigon, South Vietnam. 17 November 1971. Mr R. Brash, the Counsellor and Consul General with the British Embassy in Saigon, and his Vietnamese maid and her three children, are introduced to Marcian, by his former handler, Private David Nelson.

These refusals might have been easier to bear had the handlers been told one apparent reason for them. An Army veterinary report noted that large numbers of American tracker dogs in Vietnam had died from a tropical disease, thought (but not confirmed) to be transmitted by ticks. The disease, which very quickly caused massive haemorrhaging in all major organs, was hard to detect and could be carried by the dogs without symptoms for some time. The report strongly recommended that no tracker dogs be allowed back into Australia, “even under strict quarantine”, until the mode of transmission of the disease was discovered. By the end of 1972 the majority of Australian troops, including the dog handlers, were home from Vietnam. Most got on with their lives, more or less successfully, but their dogs were never far from their thoughts.

Haran felt that his dog, Caesar, … had been forgotten as a soldier, and soldiers should not be forgotten in war; there should be some sort of memory of them. Many ex-handlers shared this feeling, and it resulted in a permanent memorial to the dogs being erected in Australia. The Australian War Dog Memorial, complete with carved statue and a drinking trough for dogs, was unveiled at a ceremony on the Alexandra Headland, on the Sunshine Coast, Queensland, in April 2001. An inaugural reunion of past and present trackers in Queensland in March 2002 further cemented the bonds between those who served with these remarkable dogs of war, and highlighted their importance and rightful place in Australian military history. 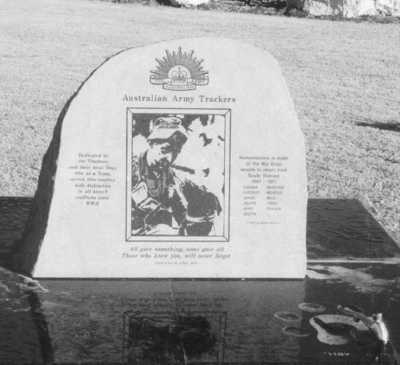 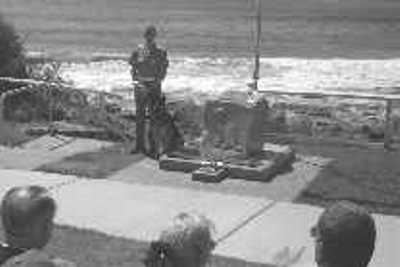 After a lapse of some years, tracker dogs are again serving with Australian forces on peacekeeping and other missions overseas. The dogs are now brought back to Australia at the end of their service.