The Poppy is for Sacrifice 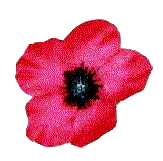 November is poppy month, the time of the year when by the wearing of a simple emblem, a red poppy, we salute the memory of those who sacrificed their health, their strength, even their lives, that we might live in a free country.

Long known as the corn poppy (Papaver rhoeas) because it flourishes as a weed in grain fields, the Flanders poppy as it is now usually called, grew profusely in the trenches and craters of the war zone. Artillery shells and shrapnel stirred up the earth and exposed the seeds to the light they needed to germinate.

This same poppy also flowers in Turkey in early spring - as it did in April 1915 when the ANZACs landed at Gallipoli. According to Australia’s official war historian C.E.W.Bean, a valley south of ANZAC beach got its name Poppy Valley “from the field of brilliant red poppies near its mouth”.

Whilst the red poppy is a symbol of modern times, legend has it that the poppy goes back to the time of the Mogul leader, Genghis Khan, as the flower associated with human sacrifice. In the 12th and 13th centuries, the Mogul Emperor led his warrior hordes on campaigns south to India, and west to envelop Russia as far as the shores of the Black Sea. The policy adopted by the armies of Genghis Khan was simple and effective. They would isolate their enemies, surround and completely annihilate them. The legend states that on the battlefields that were literally drenched with blood, white poppies grew in vast profusion.

The modern story of the poppy is, of course, no legend. In the years immediately following World War 1, governments and the whole of society, had not accepted the responsibility for those incapacitated and bereft as a result of war. In Britain, unemployment accentuated the problem. Earl Haig, the British Commander-in-Chief, undertook the task of organising the British Legion as a means of coping with the problems of hundreds and thousands of men who had served under him in battle.

In 1921, a group of widows of French ex-servicemen called on him at the British Legion Headquarters. They brought with them from France some poppies they had made, and suggested that they might be sold as a means of raising money to aid the distressed among those who were incapacitated as a result of the war. The first red poppies to come to Australia, in 1921, were made in France.

In Australia, single poppies are not usually worn on ANZAC Day - the poppy belongs to Remembrance Day, 11 November. However, wreaths of poppies are traditionally placed at memorials and honour boards on ANZAC Day.

The red Flanders’ poppy was first described as a flower of remembrance by Colonel John McCrae, who was Professor of Medicine at McGill University of Canada before World War One. Colonel McCrae had served as a gunner in the Boer War, but went to France in World War One as a medical Officer with the first Canadian Contingent.

At the second battle of Ypres in 1915, when in charge of a small first-aid post, he wrote in pencil on a page torn from his despatch book:

In Flanders’ fields the poppies blow
Between the crosses, row on row
That mark our place, and in the sky
The larks still bravely singing, fly
Scarce heard amid the guns below.

We are the dead, short days ago
We lived, felt dawn, saw sunset glow.
Loved, and were loved, and now we lie
In Flanders’ fields.

Take up our quarrel with the foe,
To you from failing hands we throw
The Torch: be yours to hold it high!
If ye break faith with us who die
We shall not sleep, though poppies grow
In Flanders’ fields.

The verses were apparently sent anonymously to the English magazine, Punch, which published them under the title, In Flanders’ Fields. Colonel McCrae died while on active duty in May 1918. On the eve of his death he allegedly said to his doctor, “Tell them this. If ye break the faith with us who die we shall not sleep”. His volume of poetry, In Flanders’ Fields and Other Poems, was published in 1919.

An American, Miss Moira Michael, read In Flanders’ Fields and wrote a reply entitled We Shall Keep the Faith:

Oh! You who sleep in Flanders’ fields,
Sleep sweet - to rise anew,
We caught the torch you threw,
And holding high we kept
The faith with those who died.
We cherish too, the poppy red
That grows on fields where valour led.

It seems to signal to the skies
That blood of heroes never dies,
But lends a lustre to the red
Of the flower that blooms above the dead
In Flanders’ fields.

And now the torch and poppy red
Wear in honour of our dead.
Fear not that ye have died for naught
We’ve learned the lesson that ye taught
In Flanders’ fields.

Other poets of the time were also stirred to write responses to McCrae’s poem.

Rest ye in peace, ye Flanders’ dead.
The fight that ye so bravely led
We’ve taken up. And we will keep
True faith with you who lie asleep
With a cross to mark his bed,
In Flanders’ fields.

Fear not that ye have died for naught.
The torch ye threw to us we caught.
Ten million hands will hold it high,
And Freedom’s light shall never die!
We’ve learned the lesson that ye taught
In Flanders’ fields.

Reply to In Flanders’ Fields

In Flanders’ fields the cannons boom,
And fitful flashes light the gloom;
While up above, like eagles, fly
The fierce destroyers of the sky;
With stains the earth wherein you lie
Is redder than the poppy bloom,
In Flanders’ fields.

Sleep on, ye brave! The shrieking shell,
The quaking trench, the startling yell,
The fury of the battle hell
Shall wake you not, for all is well;
Sleep peacefully, for all is well.

Your flaming torch aloft we bear,
With burning heart and oath we swear
To keep the faith, to fight it through,
To crush the foe, or sleep with you,
In Flanders’ fields.

Oh! sleep in peace where poppies grow;
The torch your falling hands let go
Was caught by us, again held high,
A beacon light in Flanders’ sky
That dims the stars to those below.
Your are our dead, you held the foe
And ere the poppies cease to blow,
We’ll prove our faith in you who lie
In Flanders’ fields.

Oh! rest in peace, we quickly go
To you who bravely died, and know
In other fields was heard the cry,
For freedom’s cause, of you who lie,
So still asleep where poppies grow,
In Flanders’ fields.

As in rumbling sound, to and fro,
The lightning flashes, sky aglow,
The mighty hosts appear, and high
Above the din of battle cry,
Scarce heard amidst the guns below,
Are fearless hearts who fight the foe,
And guard the place where poppies grow.
Oh! sleep in peace, all you who lie
In Flanders’ fields.

And still the poppies gently blow,
Between the crosses, row on row.
The larks, still bravely soaring high,
Are singing now their lullaby
To you who sleep where poppies grow
In Flanders’ fields.

Thanks to the National Support Group of 55/53 AIF for allowing us to use selected information from their publication “Remember”.