In the late afternoon of 18 August 1966, D Company, 6 RAR, fought for their lives for three hours in pouring rain, amid the mud and shattered trees of the Long Tan rubber plantation in Phuoc Tuy Province, South Vietnam.
Read More

Facing an enemy force of some 2500 North Vietnam Army regulars and Vietcong guerrillas, this company of mostly young national servicemen -- led by a few regulars -- called upon all facets of battlefield support for survival. Above all it called heavily on the determination, professionalism and courage of the soldiers on the ground.

The Battle of Long Tan was costly for Australia. Eighteen young Australians -- the youngest was nineteen, the oldest was twenty-two -- lost their lives as a result of this battle. A further twenty-one soldiers were wounded.

The damage inflicted on the enemy was significant. Two hundred and sixty confirmed dead and evidence to suggest that several hundred wounded were carried from the battlefield.

For its ‘extraordinary heroism while engaged in military operations against an opposing armed force’ D Company was awarded the Presidential Unit Citation by the President of the United States, Lyndon B. Johnson.

The Long Tan Cross was conceived by the 6th Battalion Regimental Sergeant Major (RSM) WO1 James "Jimmy" Cruickshank during the unit’s second tour of duty in 1969. It was constructed by the unit’s engineers, the Pioneer Platoon.

On the third anniversary of the battle, the Cross was raised at the site of the battle where it remained untouched while the Australians were stationed in the province. Today it is located in the military museum at Bien Hoa. 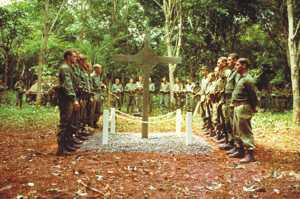 AWM EKN/69/0081/VN. Long Tan, Vietnam. 18 August 1969. Members of the 6th Battalion, the Royal Australian Regiment - New Zealand (ANZAC) (6RAR-NZ (ANZAC)) during the ceremony at which a white cross was erected as a memorial to those who died during the Battle of Long Tan.

At that same site on 15 April 2002, the Vietnamese people unveiled a completely renovated Long Tan Cross Memorial. Of most significance were the official recognition and acceptance by the Vietnamese of the importance of this site to Australian veterans. 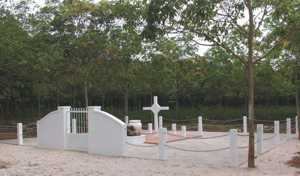 However, the accomplishment of the renovations and the importance of recognition were the results of a long process of negotiation by a group of highly respected Australians who make up the Australian Veterans Vietnam Reconstruction Group (AVVRG).

The AVVRG have for many years been active in the former Australian Task Force area of operations. This group, founded by veteran Paul Murphy, has undertaken tasks such as the provision of water filtering apparatus, an orphanage, microfinance programs, English language tutoring and most recently, a kindergarten. The AVVRG are a registered non government organisation (NGO) in Vietnam and have long been interested in, and been conducting memorial services at the Cross on occasions such as ANZAC Day and Long Tan Day.

Throughout the last twenty years, growing numbers of Australian servicemen have been making the pilgrimage back to Vietnam. During this time, the Long Tan Cross has increasingly become a focal point for remembrance of mates, both dead and living, and the sacrifices made in service to our country. Because of the unofficial nature of this memorial, upkeep was difficult and various groups had at times expressed concern at the state of the area, despite the best efforts of expatriates to maintain the site.

Clearly, something needed to be done.

The Long Tan Cross Memorial Fund was founded in June 2000 to try to gain official status for and bring a greater degree of permanence to the Long Tan Cross. The committee comprised veterans of 6RAR, the Long Tan Veterans Association, the RSL, the AVVRG (both in Australia and Vietnam) and the Navy and Air Force.

Fundraising was commenced shortly afterwards with ex-service and veterans organisations targeted in a bid to raise $60000. In addition to the Cross renovations, it was considered appropriate to provide funding for some local road works to assist the local Vietnamese as well as improve access for visiting veterans.

While funds were sought, the AVVRG, with assistance at times from the Australian Consulate, made approaches and submitted plans to the Baria Vung Tau Peoples Committee and the Union of Friendship. Being a Communist country, there were many committees and many meetings. The proposed road improvements became less of an issue to the locals as agreement regarding the Cross renovations began to emerge.

It was March 2002 when the Long Dat Peoples Committee called a meeting attended by members from adjoining wards, police departments, Foreign Affairs and the AVVRG. The Chairman declared that all were in agreement that work should proceed and presented a civil contractor who would do the work. A contract was duly produced and signed by Rod Burgess of AVVRG and a deposit paid.

On 15 April 2002, representatives of the AVVRG and the Australian Consulate were invited to a ceremony at the site where the formalities of official handover were conducted. On behalf of all Australians, MrRod Burgess accepted the beautifully restored memorial site and assured the Chairman of the Long Dat Peoples Committee that visitors to the site would observe the correct protocols.

The Committee asks that any persons contemplating a visit to the area observe the protocols listed below.