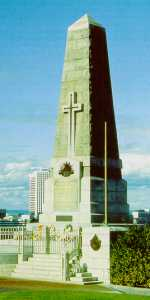 Image from a photograph courtesy of Kings Park Visitor Services

The State War Memorial Cenotaph, situated at the top of Kings Park and Botanic Garden escarpment, overlooks the city of Perth with beautiful views of the Swan and Canning Rivers and the Darling Ranges.

The memorial was developed around an 18m tall obelisk as the principal feature, which is almost a replica of the Australian Imperial Force Memorials erected in France and Belgium. This makes for a very impressive ANZAC Day Dawn Service.

The heavy concrete foundations are supplemented by heavy brick walls which enclose an inner chamber or crypt. The walls surrounding the crypt are covered with The Roll of Honour; marble tablets which list under their units the names of more than 7,000 members of the services killed in action or as a result of World War 1. Glass cases enclose the colours of the 1st, and 2nd, 11th, 16th, 28th and 44th Infantry Battalions and of the 10th Light Horse Regiment.

Construction was started in 1928 and on 24 November 1929 the Cenotaph was unveiled by the State Governor and committed to the care of the Western Australian Branch of the Returned and Services League.

For many years, members of the Highgate RSL Sub-branch have accepted the responsibility for maintaining over 1100 plaques for the memorial trees in the Honour Avenues in the park.

Each ANZAC Day and Remembrance Day, the students from Carine High School lay a flower at each of these memorial plaques.