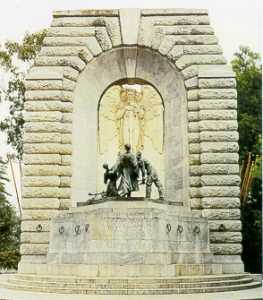 In 1919 the State Government decided that South Australia needed a memorial to commemorate the Victory of the Great War 1914-1918, and the supreme and personal sacrifice of those who participated in that war and the national effort involved in such activities. On 25 April 1931, before a crowd of almost 75,000, the memorial was unveiled. His Excellency, the Governor Sir Alexander Hore-Ruthven gave the following inspiring address:

It is not only for ourselves that we have erected this visible remembrance of great deeds, but rather that those who come after us and have not experienced the horrors of war, or realised the wanton destruction and utter futility of it all, may be inspired to devise some better means to settle international disputes other than by international slaughter. This memorial is the seal of South Australia’s homage to her sons, who in the ranks of brave company from all parts of the Empire, gave their lives during the Great War.

The winning design, ‘Spirit of Sacrifice’, features a crypt inside the memorial with bronze honour rolls to line the walls. These contain the names of the 5511 men who fell.

The National War Memorial has immense statuary significance. On the front, the figure within the arch represents the spirit of Duty, bearing in its hands a sword shaped as a cross, the symbol of battle and sacrifice. This figure is the vision seen by the group standing on the stage in front. This group, symbolic of the youth of the community, is represented as catching the first glimpse of the vision which appears above the altar of the shrine of sacrifice. Each member of the group - the student, the farmer and the girl - affected by the impulse, instinctively drops the emblems of craft and turns to the vision as it becomes clearer.

The reverse represents the passive, the aftermath of war. Once again a winged spirit appears in the arch, but this time it symbolises the attributes of Womanhood, her tender maternal compassion, her sacrifice of son and lover, and her power of resistance under strain. The spirit carries on its left arm the limp figure of a dead hero, while in its right hand it holds the cross-like sword, now in its scabbard. It was the voice of Womanhood, which uttered the stirring lines from John Oxenham’s poem, ‘Hail! And Farewell’, which were engraved below:- ALL HONOR GIVE TO THOSE WHO NOBLY STRIVING, NOBLY FELL THAT WE MIGHT LIVE.

In harmony with the sad retrospect of the theme, is the fountain of compassion fed from the mouth of a bronze lion, crowned with the Imperial crown as the symbol of the British Commonwealth of Nations. The murmur and movement of the water, being ceaseless, typifies the constant flow of memories of the heroes the memorial honours.

As well the State National War Memorial there are a further four memorials located at this site. These commemorate later wars and conflicts.