The Battle of Long Tan 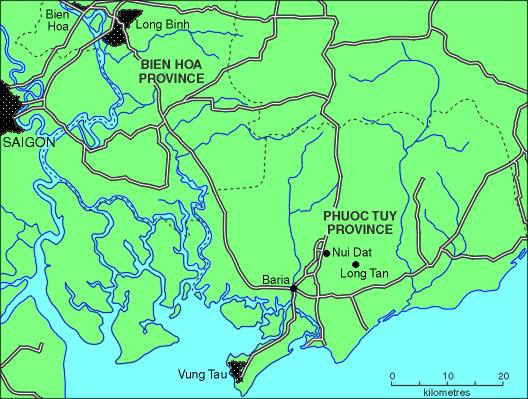 The newly arrived 1st Australian Task Force established its Phuoc Tuy operations base in 1966 at Nui Dat, a piece of high ground surrounded by rubber plantations.

The Viet Cong had achieved dominion in the province and decided to inflict a politically unacceptable defeat on the Australians. Their plan was to lure the Australians from their base by firing recoilless rifle and mortar shells into it. They theorised that the Australians would sweep the area around the base in an attempt to stop the attacks, and the Viet Cong would ambush the sweeping forces.

On the night of 16/17 August 1966, the Viet Cong fired a barrage of shells into Nui Dat, wounding 24 Australians. Prior to this event, the Australians had become aware, from radio intercepts and sightings, that a large enemy force was operating close to the base. Australian patrols sent out specifically to find the Viet Cong had not encountered the force.

On 18 August 1966 D Company of 6RAR was patrolling in the area of the Long Tan rubber plantation when, at about 3.15pm, the lead platoon (11 Platoon, commanded by 2Lt Gordon Sharp, a national serviceman) encountered a small group of Viet Cong who fled leaving one of their number killed by the Australians. The aggressive patrolling continued until, at about 4.08pm, the main body of the Viet Cong 275 Regiment was encountered. The Viet Cong attacked vigorously with mortars, rifle and machine gun fire. 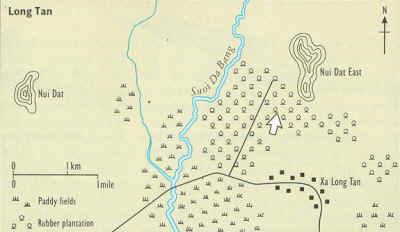 In pouring rain, the Australians returned fire with platoon weapons and artillery which was firing from the Nui Dat base, some five kilometres to the west. Close air support was also called for but couldn't be used because the target was unable to be identified accurately in the conditions.

At 5pm D Company's commander, Major Harry Smith, radioed for ammunition resupply. Two RAAF Iroquois helicopters which happened to be at Nui Dat to transport a concert party were tasked and flew at tree top level into the battle area where they successfully delivered the sorely needed boxes of ammunition. 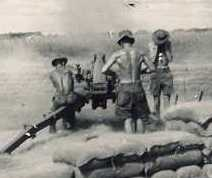 The combination of aggressive fire from D Company soldiers plus devastating artillery fire from Nui Dat had swung the battle in the Australians' favour but the Viet Cong continued to manoeuvre to gain the upper hand. Meanwhile, A Company of 6RAR had been ordered to move to the support of the beleaguered D Company.

They did so mounted in armoured personnel carriers from 1st APC Squadron which forded a flooded stream and then shortly afterward encountered a substantial enemy force. 2 Platoon of A Company dismounted and advanced on the enemy who fled.

Although the Viet Cong could still be seen massing in failing light at 6.55pm as the relief force arrived in the D Company area, the enemy force melted away as darkness descended. The battle of Long Tan was over.

The Australians consolidated their position for the night and then commenced evacuation of their wounded using the lights from APCs to guide in helicopters. During the night the Viet Cong cleared many of their wounded and dead from the battle field. A number of the wounded Australians lay there all through the long terrifying night, as the Viet Cong moved around them.

Morning revealed that the Viet Cong force, estimated at 2,500, had been badly mauled. 245 Viet Cong bodies were found in the battle area. It was apparent that the Viet Cong commanders had failed to appreciate the effectiveness of artillery fire and had paid dearly as a result.

The Australians had lost 18 killed, 17 from D Company (including the young platoon commander of 11 platoon) and one from 1st APC Squadron, and 24 wounded.

The above account has been compiled primarily from information contained in Diggers - From 6 June 1944 to 1994 by George Odgers.