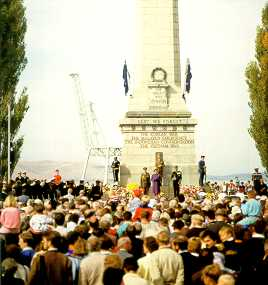 Her Majesty Queen Elizabeth II attended the ANZAC Ceremonies at the Cenotaph during the Bicentenary Royal Tour, April 1988. Image from photograph courtesy of Tasphoto Services, Hobart.

This Memorial, which replaces a wooden structure, was unveiled on 13 December 1925 and initially commemorated those Tasmanians who served in the Great War. The inscription on the monument employs the dates 1914-1919 rather than 1914-1918. This anomaly was not uncommon and was presumably influenced by the date of the Versailles Treaty (28 June 1919) and the period of active service rather than the actual cessation of hostilities in November 1918.

The Cenotaph was designed by Hobart architects, Hutchison and Walker, whose elegant design won first prize in a public competition conducted in early 1923. Their design was for a 65 feet (19.8m) high obelisk, but it was decided to increase the height of the monument by 10 feet (3.05m).

The site of the Cenotaph was selected for its prominence both to the city and the River Derwent. It is axially aligned with Macquarie Street, the city’s major civic thoroughfare. From the Cenotaph there are commanding views of the city, Mount Wellington and the Derwent Estuary. The stepped plinth of the monument, approximately 8 metres square, is bluestone and the obelisk itself is constructed of exfoliated (unpolished) light grey granite. The shaft of the obelisk is tapered and has chamfered edges. The capping is stepped, and the apex is finished with a shallow pyramidal cap. Near the top, apertures are cut in each face, in the form of Latin (Christian) crosses, and these are glazed with red coloured opaque glass and back illuminated.

A casket of solid zinc, containing the names of 522 Tasmanians who died in the Great War, was placed in the base of the Memorial on ANZAC Day 1925. No individual names are recorded on the exterior of the Cenotaph.

A bronze wreath of native laurel is located near the lower part of the obelisk shaft on the north-west face. Other bronze work includes the horizontally fluted panels at the base of the shaft, six rosettes on each side of the obelisk base and flag holders (arranged in groups of three) on three sides of the obelisk shaft.

The design of the Cenotaph was accompanied by a simple landscaping proposal for the surrounding area, suitable for public ceremonies. This area is now paved with interlocking cement blocks. Floodlighting boxes are located in each corner. Formal planting includes poplars near each corner of the paved court and a wide avenue lined with mature poplars leading to the Cenotaph.

The Cenotaph, the largest in Tasmania, is used for ANZAC Day ceremonies in Hobart, together with other commemorations such as Remembrance Day, Battle of the Coral Sea etc.

Located within the Queen’s Domain it is owned and managed by the Hobart City Council.