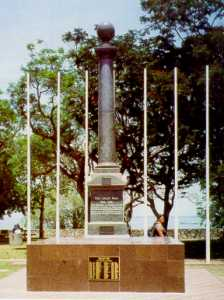 Image from a photograph courtesy of Darwin RSL

Today, this obelisk overlooks the Darwin Harbour Wharf area, from where all men from the Territory left during the First World War. The high cliffs would have been one of the last familiar sights those men would have seen as they sailed off to war. It overlooks the harbour where so many died in the Japanese air attack on 19 February 1942.

Most significant of all, it is sited on the spot from which guns of the 14th Anti-Aircraft Battery went into action, firing, arguably, the first shots ever in defence of Australia on Australian soil.

This memorial was the first official monument of any kind erected in the Northern Territory and funds were subscribed by various organisations and committees throughout the Territory during 1920. The initial chosen site for the memorial was Liberty Square, the area in front of the Administrator’s residence.

Following a brief and solemn dedication service on 24 April 1921, the monument was entrusted to the keeping of the Mayor by the secretary of the Soldiers’ Monument Committee, Mr Percy Kelsey who said:

I now place in your keeping as Mayor of this town, this token of the people’s appreciation and regard and I trust that the memories of what our men have done for us may inspire your and successive councils with a true appreciation of the seriousness of your trust and that it may enable them to tend this monument with reverential and affectionate care.

The monument has survived the 1937 cyclone, 63 bombing raids by the Japanese during which bombs landed within its close vicinity, earth tremors and cyclone Tracy. In 1966 the monument required repairs to severe damage caused by an earth tremor.

In 1971 the monument was dismantled and re-erected in the Civic Centre Gardens as the site at Liberty Square had become too crowded by Government office blocks to hold commemorative services. In 1989 it again became necessary to re-locate the monument due to insufficient space for ceremonies.

The present location on the old Darwin oval is perhaps the most fitting of them all.