Here is a range of evidence about the Battle of Long Tan.

Source 3 - List of the Australian dead - Battle of Long Tan

Source 4 - Some Australian soldiers' accounts of the battle

Source 8 - Three assessments of the battle

Go to Battle of Long TanYou may also care to read the account of the battle on this website.

Historians have to use evidence such as this in writing their accounts of what happened and why.

Your task now is to use this evidence to write an extract for a school history text on this battle. In doing so you will need to explain such elements as: 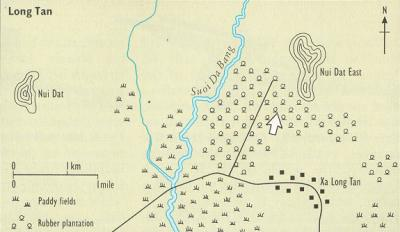 The confirmed result of the Battle of Long Tan was 245 enemy left dead on the battlefield and three enemy captured. ... The Australians suffered seventeen killed in action, one died of wounds, and 24 wounded. ... An extensive array of enemy weapons and ammunition was captured. ... possible results for the enemy included a further 150 killed and 500 wounded.

Source 3 - List of the Australian dead - Battle of Long Tan

Source 4 - Some Australian soldiers' accounts of the battle

I rolled over on my side hoping that the mud would dry out the wound and help to stop the bleeding. The artillery was still coming in and it was dark by now and I knew I'd get no help till morning at least. I kept hoping that the artillery wouldn't get me.... I was worried about my mother, and I kept thinking if I died she would be up shit creek, so I prayed a lot and made a lot of promises, but I'm afraid I never really kept any of them after I got back home. It was the longest night I've ever known. The artillery was still coming in and I can remember thinking, "This one's going over, and this one's falling short, and this one's for you Jim." ... The other thing that was really worrying me was the thirst. I drank all my water and during the night I got painfully thirsty and reckoned if I could survive the Viet Cong troops and the artillery I'd probably finish up dying of thirst. I just lay there helpless and praying and trying to stay awake and wishing to hell it would get light soon.

Vic Grice was in front of me and he got shot, and I said to someone, "What happened to Vic?" and I don't know who it was said, "He's dead." About ten or twenty metres after that I got shot in the leg and went down... It was getting fairly dark, so I kept on crawling. There was enemy movement about and I saw about six or eight VC moving back through the area where we'd come. About this time I looked up and there was a Viet Cong standing over me with a grenade in his hand but no rifle. I didn't know what to do so I just screamed at him to piss off. I think he got a bigger fright than I did, because he just ran off to the east. I found a dead Viet Cong and I pulled his gear apart and found a ground sheet, so took this with me, and looked around for some place to settle in for the night.

We recovered the bodies of our friends who had been laughing living beings the day before. Nothing takes the supposed glory out of war more quickly than the sight of dead mutilated friends. Unfortunately it brings about a hardening of feeling toward your enemy that pushes normal human feelings of compassion to the back of the mind. It brings conflict down to a very personal level and gives you the licence to remain aloof from the suffering of others as long as your own little band is protected.

The Australian mercenaries, who are no less husky and beefy than their allies, the U.S. aggressors, have proved as good fresh targets for the South Vietnamese Liberation fighters. ... On 18 August they wiped out almost completely one Battalion 1000 men of Australian mercenaries in an ambush in Long Tan village.

The communist history of the area, published in 1986, describes the communists as having 'eliminated 500 Australians and destroyed 21 tanks' in the battle.

Source 8 - Three assessments of the battle

The battle of Long Tan was the only major battle that the Australians were involved in during the war. It ensured that the Viet Cong were not able to operate in Phuoc Toy province in anything like (major) strength afterwards.

The success at Long Tan seemed to improve relations between the Australians and some of the Vietnamese locals. When the town of Ba Ria heard of the Long Tan victory it s council erected a huge banner across the road. It read: 'The people of Phuoc Tuy applaud the victory of the Royal Australian Forces and the destruction of the Viet Cong Regiment'.

Hai's (a Viet Cong officer and participant in the battle) observations on the battle .. did admit that the Long Tan battle was not good for them militarily because they did not achieve their aim of wiping out the Australian unit. However, he thought it was a good political victory in that it won them much support from the people of Phuoc Tuy, especially those displaced from their villages. ... He was amazed that Australians could look on the battle as a victory. "How can you claim a victory when you allowed yourselves to walk into a trap that we had set? Admittedly we did not finish the job, but that was only because time beat us and your reinforcements arrived. I mean, you did not even attempt to follow us up. How can you claim a significant victory from that sort of behaviour?".

... The other dispute with the Australian interpretation of the battle is the body count. The official Australian body count of VC dead is 245, but Bao a North Vietnamese soldier insists that this is not correct. Information he received has their losses at around 150. When I returned to the battlefield the day after the battle, there were bodies lying all through the area ... Would a shell-shocked digger count an arm, a trunk and a leg scattered over several metres as one body or three bodies? Nobody knew or cared at the time, and certainly not the people doing the counting. ... Looking back I don't really think that I would have seen more than 50 bodies and I spent three days in the area. How can one tell in such a situation? The only thing for sure is that the body count was not done accurately, as any private who was on the spot will testify.

I personally do not care how many troops we faced at Long Tan or whether the body count is accurate or not. ... Jingoism is the last thing we need. I do not care who claims victory ... The only fact I care about is that a lot of good men from both sides died that day and I will be forever saddened by that.