At the outbreak of war far fewer women than men participated in work, and these tended to be in lower-paid occupations. Women’s main role was seen to be in the home.

We began hearing a lot about 'the war effort' and people stopped saying the war would be over in six months, or even a year. Whenever I came home from school, the house was full of women clicking knitting needles and manipulating dark wool, and making huge quantities of socks, vests, mittens and mufflers, as well as sewing pyjamas and shirts. Mum ran Red Cross classes with first aid and bandage rolling... Mum, who was a leading light in the CWA (Country Women's Association) as well as the Red Cross, spent more and more of her time on the war effort... Nora Pennington, the good little girl who had written the composition about Gallipoli, was the school's champion sock knitter. At lunchtime and recess she sat with her ankles neatly crossed and her boots buttoned, turning the heels of the socks very prettily. She eventually won the district record for the number of socks, mufflers, mittens and balaclava helmets knitted by anybody under the age of thirteen; her father made sure that the news reached the front page of his paper, with the heading 'LITTLE NORA DOES HER BIT'. The rest of us longed to grab her knitting, rip the stitches out and snarl the wool for her.

David Gleason in Jacqueline Kent, 'In The Half LIght', Doubleday Sydney 1988 pp56-58

The withdrawal of about half a million men most of whom had been in the workforce did not, however, result in their direct replacement by women. Women’s contribution to the workforce rose from 24 per cent of the total in 1914 to 37 per cent in 1918, but the increase tended to be in what were already traditional areas of women’s work - in the clothing and footwear, food and printing sectors. There was some increase also in the clerical, shop assistant and teaching areas. Unions were unwilling to let women join the workforce in greater numbers in traditional male areas as they feared that this would lower wages. 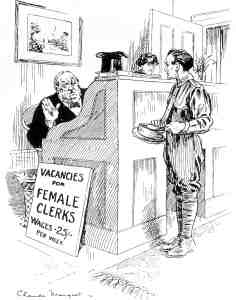 Cartoon from 'The Worker' 10 February 1916. The cartoon depicts a situation in which a returned soldier is being rejected for employment because the business is able to pay lower wages for females.

Many women sought to become more involved in war-related activities - such as cooks, stretcher bearers, motor car drivers, interpreters, munitions workers - but the government did not allow this participation.

One of the most active groups was the Women’s Christian Temperance Union, which succeeded in having hotel hours restricted in several States.

Many women were also actively involved in encouraging men to enlist, and were often used in recruiting and pro- and anti-conscription propaganda leaflets.

[More about the book HOME FRONTS AT WAR]