The following downloads are in .wav format and may not be usable on all systems.

Click here for a printable display of the sheet music and explanations for the use of all key bugle calls. 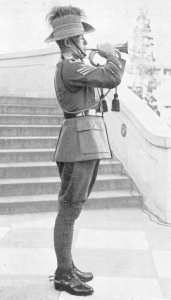 The bugle call Last Post is inextricably part of the end of day traditions which include Beating the Retreat and Tattoo.

Retreat is the older custom dating back to the 16th Century and consisting of prolonged drum beating at sunset to warn the night guard to mount and also to give notice that the gates of the town walls were about to close. This custom was also part of the end of day battle procedure when volleys were fired and a hymn played in honour of those who had fallen during the day. At this time of evening the colour would be trooped. Today this latter activity is replaced by the lowering of the National Flag.

There is some confusion over the ‘post’ calls. It seems that the ‘First Post’ and 'Last Post' came into being in the early part of the 19th Century. The ‘First Post’ was sounded as the orderly officer, the orderly sergeant and a drummer (with a bugle) started the Tattoo. They then marched from post to post with the drummer beating his drum. Upon reaching the final post the drummer would sound the Last Post. (This is why drummers carry a bugle.)

The Last Post was really the end of the day (a hard day’s fighting and a hard night’s drinking).

This bugle call has been passed down through the centuries in many countries of the world as an accompaniment to the impressive rites of a soldier’s farewell - the closing bars wail out their sad valediction to the departing warrior.

The custom of waking soldiers to a bugle call dates back to the Roman Legions when the rank and file were raised by horns playing Diana’s Hymn. To this day the French term for Reveille is ‘La Diana’.

When bugle calls were officially introduced into the British System by George III, a special call was written for the waking of troops. This was known as Reveille meaning ‘to wake again’, from the old French. Joseph Hayden is generally regarded as the composer of the calls which exist substantially unchanged today.

At ANZAC Day dawn services, Reveille breaks the silence that follows the playing of the Last Post, symbolising the awakening of the dead in the next and better world. The bugle call Rouse should be played after Last Post on all subsequent occasions or ceremonies during the day. (This note overrides the advice given at Bugle Calls 6 and 7 on the directed sheet music site above.)